Located in the Aegean Sea, Santorini Island is one of Greece’s most famous islands. Santorini, a volcanic island off the coast of Greece, is a perfect destination for anyone seeking a relaxing vacation. As a result, it is frequently considered one of the best honeymoon vacation destinations. Known for its classic architecture, blue-domed churches, and stunning landscape, Santorini is the most excellent representation of the typical Greek island picture travelers have in their thoughts when they think of Greece.
Santorini, which was given its name in honor of St. Irene in the 13th century, is a fascinating island, distinguished by its black-colored volcanic dunes and white-colored homes. It is also said that the island’s past is intertwined with legendary myths and that it was once the home of the Atlantis, according to legend. This crater island, which was formed due to volcanic eruptions thousands of years ago, has the shape of a crescent. Swimming in the island’s waters, which are supposed to have therapeutic properties, is one of the pastimes that may be enjoyed. If you are traveling on the island, which has steep slopes, using donkey taxis may be a lot of fun.

History of Santorini
Around 3600 BC, the island of Santorini was the home of a significant civilization. An ancient Minoan colony was discovered in an important city near Akrotiri and the famed Red Beach, thanks to archaeological discoveries in the area. With various wall decorations and pottery pieces depicting realistic landscapes of animals and humans in the same old Minoan style as those discovered on the island of Crete (such as Knossos), the city was strikingly similar to those found on the island of Crete. It has been suggested that the destruction of the island is strongly related to Atlantis’s mythology in several ancient mythologies.

Is Santorini The Lost Metropolis Of Atlantis, As Some Believe?
Santorini has stories regarding Atlantis city, the mythical continent that sank to the sea’s depths when in its height of power. The allusions to Atlantis that can be found in Plato’s dialogues ‘Timaeus’ and ‘Critias’ serving as the beginning points for the argument concerning Atlantis. Solon’s conversation with the priest took place 900 years before the inhabitants of Atlantis launched an attack on Athens. On the other hand, the Athenians defeated them and freed all of the areas that Atlantis had taken over. Later, Atlantis was devastated by a devastating earthquake and a flood, completely submerged in the water. Scholars have concluded that the lost city of Atlantis was none other than the island of Santorini as a result of discoveries made during the excavations at Akrotiri.
Myths About The Formation Of The Island Of Santorini
In and around the Greek islands, several old myths are to be found. As well as depicting island attributes and activities, the mythology also includes representations of human characteristics and actions.

A clod of soil thrown into the sea by Euphemus, son of Poseidon. Poseidon had a dream one night in which he made love to a nymph, the daughter of Triton. Triton was also the son of Poseidon, and the Goddess of Beauty and Love Aphrodite. In his dream, a nymph who had become pregnant and was afraid of her father’s wrath requested that Euphemus get a clod of soil from Anaphe, the island where he and the Argonauts were staying, and toss it into the sea so that she may hide there and give birth to her child. 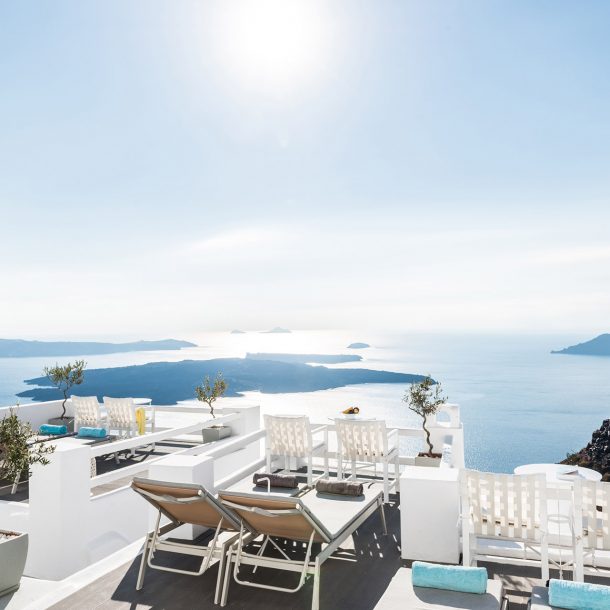 You can find out more about which cookies we are using or switch them off in settings.

This website uses cookies so that we can provide you with the best user experience possible. Cookie information is stored in your browser and performs functions such as recognising you when you return to our website and helping our team to understand which sections of the website you find most interesting and useful.

This website uses Google Analytics and Facebook Pixel to collect anonymous information such as the number of visitors to the site, and the most popular pages.

Please enable Strictly Necessary Cookies first so that we can save your preferences!